A Rising in the Desert: Reflections on the Rising Phoenix

A quiet suburb of Phoenix, known for its annual ostrich festival and the sprawling Sonoran Desert, the city of Chandler was turned upside down on Saturday when it was invaded by the most well built women on the planet. The people of Chandler fastened their collective seatbelts as their city hosted the 4th edition of the Rising Phoenix Women’s Bodybuilding Championship along with the Arizona Women’s Pro, a world class event featuring a ladies–only assortment of sculpted bodies ready to compete in each of the five competitive divisions – bodybuilding, fitness, figure, physique and bikini. 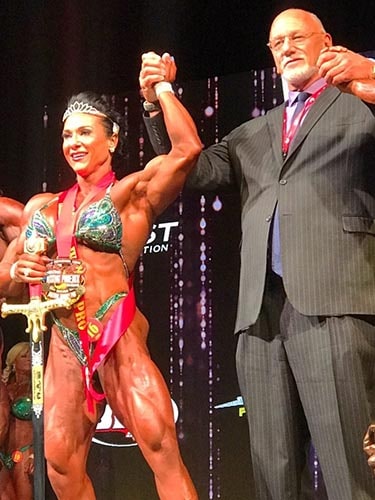 As the weekend unfolded it quickly became the latest reminder that all events are NOT created equal. The Rising Phoenix is different in nearly every possible way. While the athletes competed for the 3rd largest prize purse of the year, the audience was taken on a personal journey with each of the 20 ladies gunning for the most coveted title in women’s bodybuilding. Each bodybuilding routine was preceded by a video presentation giving way to a revealing look into the sacrifices and the personal lives of some of the most dedicated athletes in the world. By the time the night ended, 39 year old Romanian bodybuilder Alina Popa earned the title, along with a cool $50,000, a new Corvette, and the right to be called the best female bodybuilder in the world.

The production team at Wings of Strength continues to establish new standards. While some bodybuilding contests have been reduced to an assembly line of bodies walking across a stage, the Wings of Strength philosophy is noticeably different. According to CEO Jake Wood, “We work extremely hard to showcase every competitor at our shows by giving them the kind of experience they deserve. These ladies make extreme sacrifices and we honor each of them by making significant investments in production value and prize money. And we’re just getting started.”

Our team here at DigitalMuscle.com was on hand to produce a LIVE webcast of the event (available now for replay) and it gave us a chance to experience the Wings of Strength philosophy up close and personal. On Sunday I was taken on a tour of their new headquarters, a jaw-dropping 25,000 square foot newly designed facility that serves as home for a company positioning itself as an industry leader. During a time when most companies are obsessed with profitability and cost-cutting, Wings of Strength, along with production partner Tim Gardner, has managed to put authenticity and unrelenting passion back into event promotion.

Keep a close eye on Wings of Strength, a company doing things the right way…..and showing no signs of slowing down.