Alina Popa’s Journey to the Top

It’s a Monday morning and the temperature is already dropping here in Colorado, fresh air comes in through the open windows of my new car. The sun is shining in the Mile High city, not a cloud in the sky. As a truck pulls up along side of me, the woman driving it rolls down her window and screams “Congratulations” at me. The car I’m driving is a trophy I just won- it has decals on it with the Wings of Strength logo and the words ‘2018 IFBB Wings of Strength World Champion’; I raise my thumb up and thank her. All of a sudden I get goose bumps and tears in my eyes as I begin to flash back at the moment the emcee Sara Hurle – who happens to be one of my closest friends- announced me as the 2018 Rising Phoenix World Champion, a title awarded to the #1 female bodybuilder in the world.

I feel a deep gratitude in my heart for what I perceived to be an amazing gift from the universe, which in turn sets my day up for a great start and a wonderful positive attitude which I know will attract even more of these feelings from the people I will be in contact with at work.

I’ve never forgotten the realities of where I came from. My journey has been against all odds. I was born in a middle-class family in a small town in Eastern Romania and I always dreamed of being independent, making my own living, exploring the world, and experiencing life and all it has to offer. As an athletic child, I was always into sports – track and field, Martial Arts, aerobics -but I never imagined that physical qualities like strength and agility, coupled with the power and will to push my body further and further- would help me turn all this into a career, that I would choose something so unique and outstanding like bodybuilding. I never imagined I would be good enough to be a bodybuilder – and a successful one at that. But with each passing show- the first one a local show in Romania 18 years ago where I was runner up- I gained more confidence and I realized how to push through limitations and really shoot for the stars. 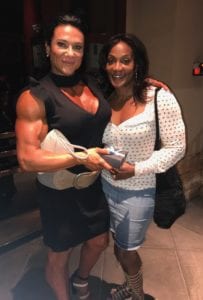 Once I turned pro in 2008 winning the IFBB Overall Amateur World Championship, I started competing in the USA at events like the Ms. Olympia and Arnold Classic. My professional debut came in 2010 at the Arnold Classic where I placed 8th. After that, in every show I entered I placed top 5 and my two Ms. Olympia runner-up titles in 2013 and 2014 only made me realize I had what it takes to be the best in the world.

I will never take credit for my genetics because I have no control over that. I was always aware of how important genetics and abilities for a particular sport are and this is the part that always kept me grounded. This was just a gift and without it I wouldn’t have been able to achieve everything that I have. The second component of success in this sport is the hard work and dedication we put into achieving our goals, but I see that as the result of either an inherited trait or a learned trait. I was blessed with great parents who taught me by example how to be a hard worker, to have work ethic, and to be honest and ambitious. I am forever grateful to my parents who raised me this way, giving me the best education to begin my life.

Being the number one female bodybuilder in the world became my goal as soon as I processed all these things and started being successful in the USA. I moved to the states in 2011. Now, seven years later, I have managed to finally get the title I worked 20 years for and, trust me, it is such an overwhelming feeling!

In 2015, Jake Wood and the team at Wings of Strength has been a true leader in the female bodybuilding world after the Ms Olympia was held for the final time. They created the Rising Phoenix World Championship, the pinnacle event for female bodybuilders. After a failed attempt at getting the title in 2016, when I got 3rd, 2018 was the year I achieved my goal.

To me, getting the absolute title in the sport is more than just a personal success, it’s now a duty to represent the sport in a gracious way, to help others in search of achieving their goals, to help the sport itself to develop by attracting new talented athletes. I have a lot of passion for this sport, since I think that I need to give back to something that has offered me, in its turn, so much. Bodybuilding helped me build and strengthen my character, it helped me develop self-confidence, it helped me build a great life for myself in a great country, and it allowed me to meet so many amazing people. All in all it has made me become a well rounded, better balanced individual.

My dreams and wishes have become reality as recently I started working with Wings of Strength in organizing bodybuilding competitions as the athletes’ representative. It is my privilege to work with these amazing female athletes and encourage the new and upcoming competitors and future stars to follow their passion, their heart, and not be afraid to be different in doing so.

Being a proud bodybuilder is just a small example of applying the concept of true freedom in our lives. If we master this, not succumbing to society’s pressure, but harmoniously integrating in our unique individual way, then we succeed. Then we can take this lesson and apply it in so many other fields in our lives and success will invariably follow. I am just a small example of this concept: being free means bringing our own conceived reality into existence.