Helle Trevino is the new queen of women’s bodybuilding. On 9 September 2017, she won the IFBB Wings of Strength Rising Phoenix at the Talking Stick Resort in Arizona. At 5-foot-5, she came in at 157 pounds and narrowly beat Sheila Bleck, who also placed second last year. It was culmination of a long journey for the woman that Steve Wennerstrom called “Denmark’s queen of density”. Inspired by Bev Francis, she began competing 1998 at the age of 22. She won the Jan Tana on her pro debut in 2003 at the age of 27. After an eight-year break she came back in 2011 and has been competed every year since then. We caught up with her a couple of weeks after the show.

How does it feel to be the best female bodybuilder in the world?

Amazing! I guess amazing is the right word. Incredible. It’s a dream come true. I have to process that – being the best in the world. I’m still like, damn! Not just that but also, what am I gonna do with it? I take it seriously. It’s a great feeling to be the best in the world. But I also know it is for a limited time. You don’t know how many years you have and I want to accomplish something with it. I don’t just want to sit on a trophy and come back next year and get another one. I really want to elevate the sport and use the voice that I have to make an impact. I want to be a great ambassador for women’s bodybuilding. Obviously I look up to great athletes such as Cory and Lenda. But that was back in the day. The times were different and the look was different. It’s a new era now. For me it’s all about how to go about translating what they did into how we promote female bodybuilding today. I also want to bring us girls together and do future projects together. I want us to work as a team. As I’ve said to some of the other girls, my win is your win. If I benefit, I want you guys to benefit too. 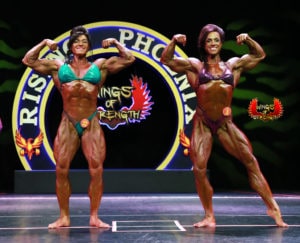 It was extremely close between you and Sheila. How did you think you compared?

It’s apples and oranges. We have different physiques and it comes down to what the judges like and also what direction they want women’s bodybuilding to go into. I have a lot of respect for Sheila and she has a great physique. I’m grateful that she gave me a good battle – that’s what makes shows interesting.

After last year, a lot of people thought you didn’t have the look they wanted. Did you worry about that?

I worried about that a lot. Last year, going into the show I really thought I brought it. But looking at the pictures, with the feedback I got, I could see that wasn’t the look they wanted. A lot of people were dismayed with my placing last year because it was a strong bodybuilding look – it was a lot of size, a lot of fullness, I was shredded. But in hindsight I was too big. They wanted something more elegant and not so bombastic. The feedback I got was that I was just too freaky. They wanted something more feminine, more streamlined. So I’ve been working all year and getting feedback from different judges to make sure I was going to go in the right direction. It’s always hard to figure out what the look is they want. It can be frustrating. Sometimes they say you’re too big or too small, too watery or too dry. It’s been a process to figure out what was a good look – it’s been a combination of my own taste and the feedback from the judges.

So what did you do differently this year?

I’ve been doing my own training this year and I’ve been working hard on my symmetry and using my own training techniques and ideas to bring the physique I thought was the most aesthetic. I worked with Chris Aceto and we just changed the idea, the whole outlook. In 2016 it was like, let’s just get as big as possible and outmuscle everyone – and that didn’t work out! This year it was the exact opposite approach – it was like, you’re big enough, so let’s try and streamline that and get you as small as possible! I haven’t been this light since my pro debut at the Jan Tana in 2003. This show I was 157. Last year I was 170. So I dropped 13 pounds.

So you were happy with how you looked?

Yes – very happy. It reminded me of how I looked at the Jan Tana – it was that kind of conditioning, just with more muscle, especially more muscle in my upper body, and more detail and roundness. I’m much more complete than I was then but it was that super dry, crisp conditioning – but still with round muscle bellies. It’s hard to hit that exact crisp dry conditioning without being flat. But we found the formula!

When did you know you were going to win?

I wasn’t sure before they said my name – you can never be sure. But I felt I had it. I just had this feeling that I’ve brought it and I thought my physique was the winning physique. Right off the bat I knew it was between me and Sheila. Even before the competition, I knew it was probably going to be between her and me. Then they took us out right off the bat – just me and her. So I was like, okay, it’s between me and her – I knew that right away. I had more size. She looked like she was on her game but when you have an athlete next to you it’s hard to see what kind of condition they’re in because you don’t see them flex.

How did you do that?

So it was a tough prep?

It was the hardest prep, like, ever! But it paid off! 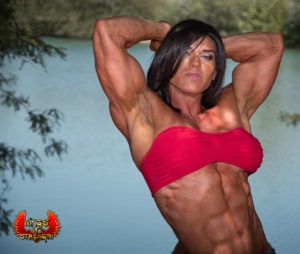 What kind of changes would you like to see in women’s bodybuilding?

We gotta be more visible. If we’re not visible, we won’t make new fans. How can you sell a product if no one knows about it? We gotta be at the shows and get the fans excited about female bodybuilding. Instead of one female bodybuilder guest posing, if you could get four or five onstage together – how powerful would that be? I would like to see female bodybuilding at more amateur shows. Another thing is that we need weight categories back at the pro shows. How can we make sure we don’t lose all the lightweight female bodybuilders that just turned pro to physique? Even the guys have 212. I don’t have an answer to it all yet. We have to work it out like a puzzle. But I’m open to ideas!

What did you think of the show?

Obviously I won so I may be biased but I thought it was the best show ever! The energy was really great. Backstage we were laughing and having fun and taking pictures with each other. Sometimes something bad has to happen for something good to come along. You know how in times of crisis people learn how to stick together? We used to be really competitive and a little catty. But that has really turned around. We were almost extinct, wiped out. So I think that was a wake up call to a lot of us and we’re like, we gotta fuckin stick together if we’re gonna survive! Wings of Strength have also done things like Muscle Mansion to get us together and improve the camaraderie. Back in the Olympia days I didn’t know anyone. Now we all talk and we have great respect for each other. We have a connection – we share a passion and we get each other.